The main function of the bearing is to support the mechanical rotating body, reduce the friction coefficient during its movement, and ensure its rotation accuracy. It can be understood that it is used to fix the shaft so that it can only be rotated while controlling its axial and radial movement. If the shaft does not have a bearing, it will not work at all.  So in the process of using bearings, how can we take effective measures to reduce the occurrence of bearing failures?

1. Check the new bearings one by one

Generally, new bearing shafts are used instead of overhauled bearings. There are not many quality problems with the bearings themselves, but they cannot be ruled out. The new bearings to be installed are inspected one by one, mainly checking the inner and outer rings, rollers, cages and rivets of the bearing for no bumps, deformation, looseness, rust and other defects. Once the defective bearing is found, measures shall be taken in time to prohibit loading and use. 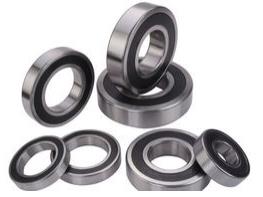 Grease should be stored in a closed environment. The dust cover should be covered every time it is used to prevent foreign matter from entering the bearing room. The bearing cover, oil pipe, end cover bearing room and other parts should be thoroughly cleaned with gasoline before assembly. Defects such as rust and foreign objects.

For DC motors, the possibility of bearing current corrosion is very small, mainly due to external reasons. Generally, it is caused by abnormal welding. We need to clarify the welding requirements and the connection position of the ground wire during rework and subsequent welding to avoid current flowing through the bearing during welding.

In addition, the AC motor itself will also generate shaft current when it is running, causing electrical corrosion failures in the bearings. In order to avoid such stories, generally, AC motors use insulated bearings to reduce current corrosion failures. For a DC motor, an arc will be generated after a shot occurs during operation, which will cause the locomotive to over-current and ground. At this time, the arc will pass through the commutator ring and then be released to the ground through the bearing, which will cause the bearing to experience electrical corrosion failure. Therefore, when the DC motor is fired, the bearing should be disassembled and checked to avoid electrical erosion.

The use of maintenance is a very important task, which requires the cooperation and maintenance of each major operation section. Generally, every 20,000 kilometers of locomotives need to carry out oil replenishment maintenance for the motor bearings. The amount of oil added should be controlled: 20g-25g for the big end and 10g-15g for the small end. At the same time, the cleanliness of bearing grease should be ensured and the mixed-use of grease should be avoided.

It is necessary to train operators from time to time to establish quality awareness and improve overall quality. Strengthen external communication to reduce bearing failures caused by improper maintenance.